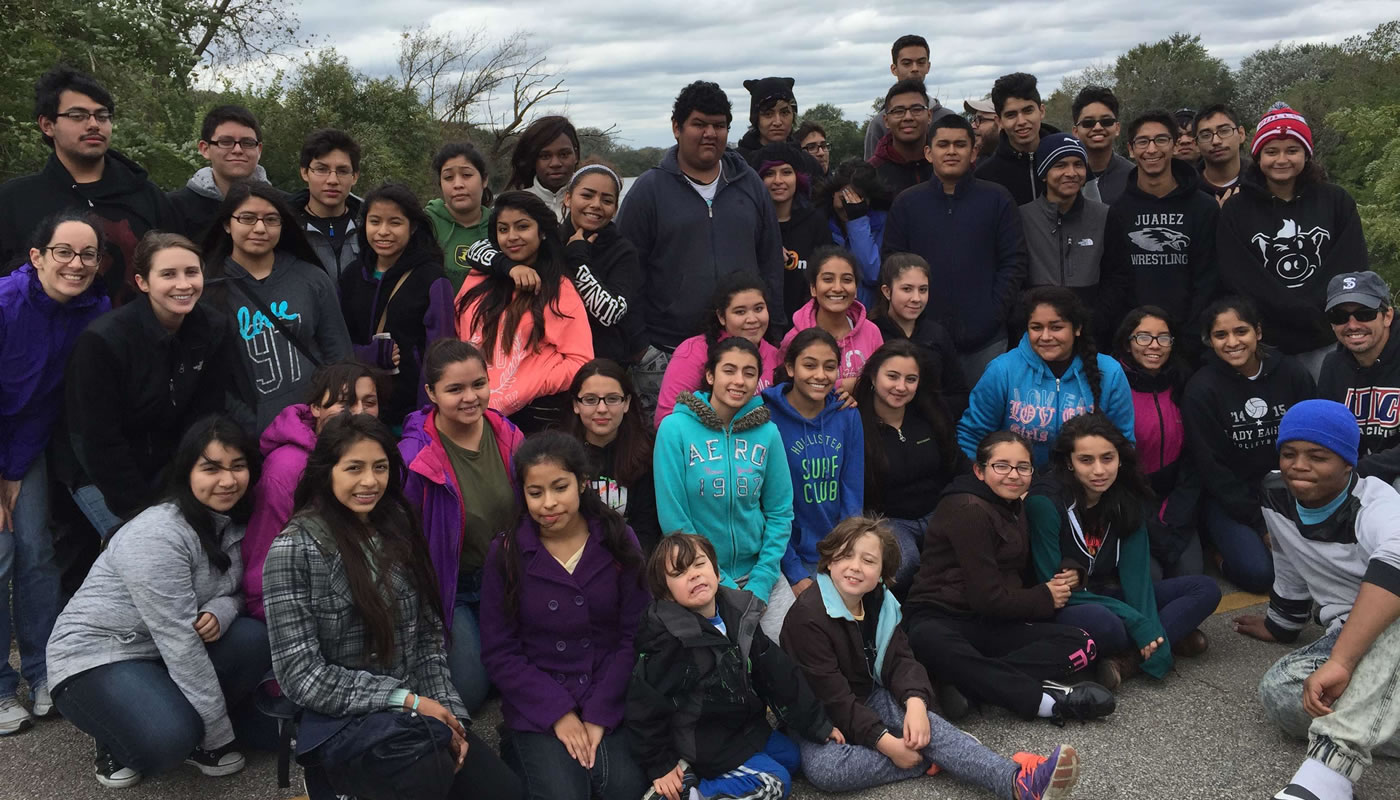 Betsy Grace gets to see the moment many students from the West and South Sides of Chicago set foot on a forest preserve for the first time for a habitat restoration workday. As you might imagine, that first reaction is not always one of pure awe and wonder. “There are those few moments of kids wearing their strappy sandals or their nice Nikes,” says Grace. “They don’t realize we’re here to work. They bring their city attitudes. There are usually a few moments of hesitation, like “I’m using this to cut that?”

Grace, a volunteer coordinator for the nonprofit buildOn, which works with low-income communities and connects high schools with meaningful service learning opportunities, says that Forest Preserves of Cook County volunteers and staff play a key role in easing students from hesitation to wonder. “There’s always a Forest Preserve volunteer or site steward that’s really great,” she says. “We’ve worked with some incredible people. They welcome the students, and they teach without condescending…. They help the students get out of their comfort zone and teach them new things.”

Before long, the students are exploring the preserve around them and piling headlong into thickets of buckthorn to saw or lop down the invasive species. Grace says Forest Preserve workdays have become one of the students’ favorite trips.

“Some of the really great moments are when there’s a really big buckthorn tree,” says Grace. “I say, ‘There’s a man with a chainsaw, and he can do it,’ and they’ll tell you, “No, I’m doing this. I can do it.’ It’s a point of pride and accomplishment. Or when their eyes get wide: ‘That’s edible?’ Or when they find animal bones: ‘What?! Possums live here?’ It’s not something that they see in a more urban area.”

According to FPCC Volunteer Programs Specialist Kevin Kuhn, each year between 200 and 300 teen groups volunteer in the Forest Preserves. So far in 2016, about 5,000 individual students have contributed roughly 14,000 volunteer hours. Although the FPCC works with a wide range of corporations, community groups, faith-based groups and public and private schools from elementary age through college, Kuhn says the majority of outside organized groups coming to volunteer in the preserves are public high schools, many of them in the Chicago Public Schools system. Colleges are also an important part of the picture.

Although FPCC staff are often present, most of the time it’s a volunteer leader who’s organizing the workday, greeting and leading the groups. “They have to be involved,” says Kuhn. “Most of the time they are physically there, ground truthing, telling us ‘this is what has to be done right now,’ because it’s always changing. ‘We need this buckthorn cut, these seeds collected, this trail mulched’—the site steward is integral to the process of what we are doing and how we are doing it because they’re the ones who are routinely there.”

“The stewards are willing to host groups, they bring instructions, experience, tools, often water and food,” says Kuhn. “They often set up before and clean up afterwards. And they’re not being paid to be there. They see that these kids need to get outside, that there is a natural world out there that they are missing. They see that human disconnect with the natural world and they do something about it.”

Volunteering in the Forest Preserves has large benefits for the students, agrees Erin Faulkner, who teaches at Curie High School in Chicago and brings students out to sites such as Theodore Stone and Sundown Meadow as part of the school’s Green Action Alliance club and Advanced Placement science. “What I’ve noticed—especially because a lot of the students that go need extra credit, and are sometimes the ones who aren’t doing as well—most seem to have a really great time, really understand the work and work hard. I think it just gives them a better view of things outside of a textbook. They can see there’s nature in Chicago, not only far out west. What we’re learning about ecosystems and biomes, they can actually see it work and take part in it. This makes it more real for them.”

This year at Orland Grassland in southwest Cook County, Gretchen Bernard, Associate Professor of Biology at Moraine Valley Community College, brought her honors biology class out for three field study trips. The first visit was an orientation and interpretive walk focused on the seasonal components of restoration activity and winter plant identification. The second involved fast-track participation with volunteers that included brush clearing and burning, legume seeding and bird monitoring on the hike back. During their third visit, the students focused on emerging spring invasives and the impact of invasive plants on habitat. With these field study trips, Dr. Bernard’s class kicked off a relationship between MVCC and Orland Grassland that has great potential for expansion in the next few years.

Orland site steward Pat Hayes has worked with schools for years. “Nothing jumpstarts my engine more than taking students out there and having them really grab hold and go ‘Wow, this is amazing!’ Sometimes you think this is a lot of work and are you doing any good, but when those kids get out there and their eyes light up, it’s magical for me.”

She recalls a recent workday: “Lincoln Way Ecology Group had so much fun out there, loved getting in there, off the path, into the wildness of it all. They just loved it. They were laughing and it was good. And they get a lot done.”

Hayes says the Orland Grassland Volunteers have made connections with schools by reaching out in a variety of ways, including publishing an e-newsletter, using social media, going to events and giving presentations. Those connections have naturally led to others. “We got a great jumpstart when I made a relationship with some teachers at Carl Sandburg. These guys were great sending kids out for community service hours. But then because they were more aware of Orland Grassland, when it was their school’s turn to host a countywide science conference, they included Orland Grassland as part of their walk. There were many teachers involved in that. I think that’s how Jennifer and Laura came in from Sandburg and Andrew [High Schools]. Two teachers I didn’t know—they found me. I think it’s because of my being proactive and having a higher profile in the community that they were able to find me.”

There are many examples across Cook County of such collaborations, with relationships that go back decades. St. Ignatius High School teacher and steward John Balaban started bringing his students to workdays at Bunker Hill and Harms Woods in the 1980s. Several Ignatius teachers have followed suit, and for the last several years volunteer leaders have hosted as many as 80 AP environmental students at North Branch sites.

Countless school-steward partnerships have sprung up in other preserves over the years: Washington High School with Eggers Woods in the far southeast corner Cook County, Harper College with Spring Creek in the far northwest. Nazareth Academy with Wolf Road Prairie, Oak Forest High School with Yankee Woods, Steinmetz High School with Schaumburg Road Grasslands, Wright Junior College with Miami Woods. Colleges such as Northwestern University, Truman College and Oakton Community College have long participated in workdays and brought students out the preserves. And this is just a small sample, to say nothing of the elementary and junior high schools that participate through educational programs such as Mighty Acorns.

For many students, volunteering is their introduction to an entirely new world. We focus on how being outdoors makes you feel,” says buildOn’s Betsy Grace. “So often we hear from them: ‘It’s so quiet! I can smell! I can hear birds!’ It’s really powerful for students to realize there’s more than the small neighborhood they live in.’”

Some students catch a spark that starts them on a path to more experiences in nature, even careers. “Jones Prep came out as a school group to Arie Crown with a teacher,” says FPCC Volunteer Resources Manager Kathy Wurster, “but a few of the kids liked it enough that they are organizing themselves to come out without a teacher — just a group of schoolmates driving out together.”

Faulkner says about a dozen of her Curie High School students have gone on to participate in the Friends of the Forest Preserves summer internship. “Every one who comes back to me has had a really awesome experience,” she says. “I had one student who said, ‘Oh, Mrs. Faulkner, it was the greatest thing I’ve ever done.’” One of Faulkner’s former students, Gloria Orozco, now works for Friends of the Forest Preserves.

Both Grace and Faulkner credit the Forest Preserves bus program with enabling these adventures. “The District makes it really easy,” says Faulkner. “We never have to pay for any of the buses. If they didn’t do that, we wouldn’t be able to go out.”

Kuhn says he is constantly inspired by everyone who plays a role in getting children out in nature. “For high school teachers, this is above and beyond what they have to do for their job,” says Kuhn. “There are people who come out on a regular basis to Forest Preserve sites. And it’s not just teachers. Sometimes it’s the librarian or somebody else on staff who’s got nothing to do with the science class.”

“The biggest thing is diversifying education for young people,” says Grace. “You can’t bring the Forest Preserves to your classroom. You have to take the time to get out of the classroom.” At Whistler Woods, from high schools’ first workday to their third, Grace sees big changes in both the students and the landscape. On their third visit, she says “The students were even a little disappointed—not that much buckthorn left to cut down!”

Kuhn recounts a recent high school workday around a wetland at Little Red Schoolhouse Nature Center in Willow Springs. “Greencorps Youth were out with [naturalist] Karen Garrett, clearing multiflora rose,” he says. “They got to see a frog. They got to see a snake. And they dropped their game face. We all have a game face we put on. Then we’re confronted with the beauty and wonder of the natural world, and we’re all kids again. It’s like, ‘I can do this. I’m not a stranger here.’”

How to Start a School-Nature Connection

Are you a steward or volunteer leader who wants to engage school groups? Make a list of the schools near you. Biology or science departments are often a good place to start. (Here’s an interactive map of colleges in Illinois with environmental programs.) FPCC’s Kevin Kuhn, (773) 631-1790 x19 or Kevin.Kuhn@cookcountyil.gov, is happy to help when you’re ready to reach out. Since he often works with the FPCC’s education and outreach teams, he may already have some useful contacts and places to start.

Are you a student, teacher or administrator who wants to volunteer in the Forest Preserves? Learn more about Ecological Stewardship workdays find a workday near you. If you plan to bring a group of more than five, please contact the site steward or volunteer specialist Kevin Kuhn ahead of time.