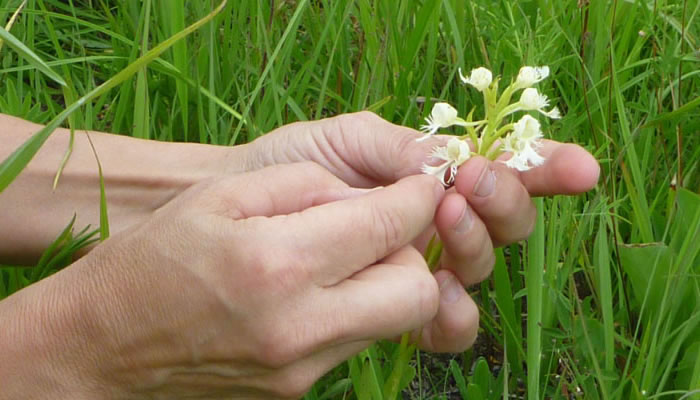 Last week, Forest Preserves volunteer steward and orchid devotee Cathy Bloome went out to the Cook County site she visits each year to see whether the eastern prairie fringed orchids she monitors were still there.

“Last year was so heartbreaking,” she says. “All the orchids at the site I monitor were just blooming, and then the drought hit. All the flowers I was pollinating were wilting.”

With only a scattering of populations regionwide—and usually fewer than 10 plants in a location—an extreme event like a drought can have a large impact on the federally threatened eastern prairie fringed orchid. The orchid has evolved a special relationship with a select few nighttime pollinators, including the hawk moth. It depends on an equally exclusive relationship with a certain kind of fungus for its seed to germinate. Fortunately, much more recently it has added another interspecies relationship—with human volunteers.

This exquisite flowering plant once flourished in the wet prairies of the Midwest, when its pollinators and preferred fungi were abundant and could easily move between populations. But as European settlers plowed and developed the landscape, populations of the orchid grew ever more scattered, and pollinators ever more scarce.

In the early 1990s, a corps of dedicated volunteers emerged to keep the fringed orchid from disappearing. The program is now overseen by the U.S. Fish and Wildlife Service, in collaboration with landowners such as the Forest Preserves of Cook County. Fish and Wildlife biologist Cathy Pollack coordinates recovery of this orchid across its native range in the U.S. She oversees an army of more than 70 Chicago-region volunteers (many working in Cook County forest preserves) who visit the scattered populations several times a year to record orchid numbers and other data, pollinate the orchids and, later in the year, collect some of the seed capsules for reintroduction into new places.

The pollination process is intricate and intimate. “We use really hi-tech tools: a toothpick and a piece of cardboard or foam that we stick the toothpick in,” says Bloome. The volunteers carefully use the toothpicks to transfer two tiny waxy masses called pollinia—the orchid version of pollen—from one flower to another. In the absence of the hawk moth, the volunteers are replicating what would normally happen in nature: “The insects come to get nectar in a spur and inadvertently knock against the pollinia,” says Bloome. “There’s a mechanism that will shoot it out and actually stick at the base of the moth’s proboscis, or mouthparts. Then it will go to another flower somewhere else. Where the pollinia was stuck to the moth, it will be on the right spot to pollinate the next flower.”

Thanks to the volunteers’ hard work, the program saw a dramatic increase of the eastern prairie fringed orchid across Illinois. In Pollack’s 2012 Field Season Update, volunteers reported 1,353 blooming plants in 2011, “the second highest count since the start of the program in 1991.” But in 2012, after a year of extreme heat and drought, she writes, “the population will not top 700 plants.”

This week, Bloome and other orchid-pollinating volunteers are finding out how these survivors are faring in 2013. They remain cautiously optimistic about the future, hopeful that by building the population in good years, they’ll be helping the eastern prairie fringed orchid persist through the hard times. In the meantime, they enjoy the process of getting to know these plants and everything else in nature they see in the process.

“Oh yeah, this is so much fun,” says Bloome. “Once I read about this project, I thought this is just for me. This is my thing.”

Interested in contributing to the success of the eastern prairie fringed orchid? The best way is to join a volunteer workday to help restore the habitat where orchids can thrive. Think you have what it takes to be a dedicated orchid monitor? Contact Cathy Pollack at (847) 381-2253 ext. 28 or cathy_pollack@fws.gov.