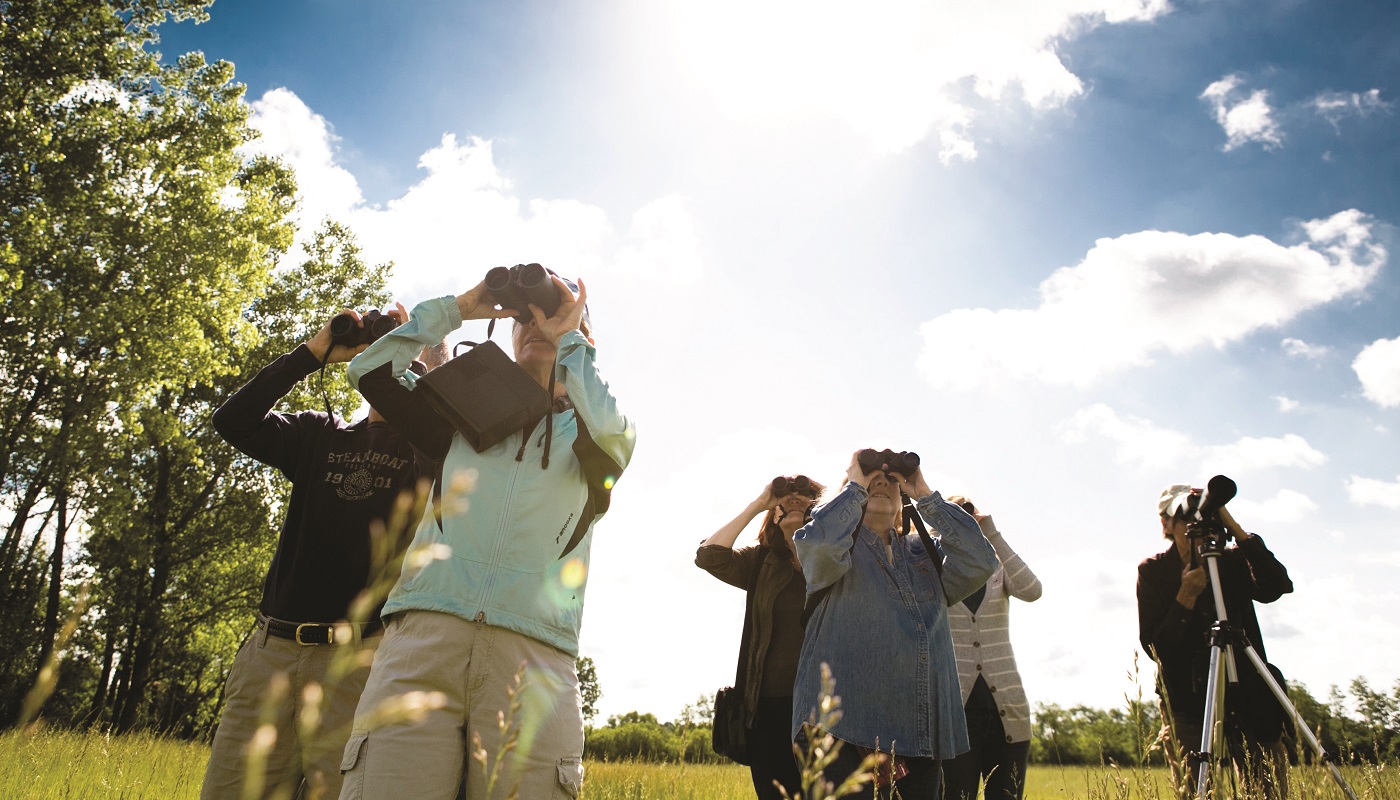 Did you know? Summer is a great time to #BirdThePreserves! Here are some of the bird species you can spot during a summertime birding excursion:

Dickcissels (Spiza americana) are commonly found in overgrown pastures, savannas, and croplands. They have a chunky build with a black “V” pattern on their yellow chest. Dickcissels make a distinct, clicky buzzing “dick-dick-ceessa-ceessa” sound that provides them with their common name. They are one of the few songbirds that have many mating partners over their lifetime.

You may spot tree swallows (Tachycineta bicolor) in fields and wetlands. They have shimmery, deep-blue backsides that contrast with their clean white fronts. Tree swallows are an entertaining bird to watch as they make sweet, chirping calls and put on dazzling aerial displays while chasing after flying insects. The tree swallow’s name comes from its habit of nesting in tree cavities.

House wrens (Troglodytes aedon) are small brown birds that are known for their loud, exuberant calls. They may be spotted flying through shrubs and low tree branches in backyards, parks, or wooded areas as they snatch insects. The house wren’s name comes from its habit of building twig nests in empty cans or boxes in garages or sheds. They prefer building inside shelters where the temperature is more likely to rest between 65- and 106-degrees Fahrenheit–otherwise, their eggs could die.

The great egret (Ardea alba) is a large white bird with black legs, a yellow bill, and a lengthy wingspan. They can be seen hunting for fish throughout wetlands in the Forest Preserves. Typically, they stand or wade through waterways and then jab at fish with their pointed bill. Sometimes, they swim or hover over the water and then dip in to catch a fish. Great egrets seem to be in slow motion while flying, using just two wingbeats per second while reaching speeds of 25 miles per hour.

The pied-billed grebe (Podilymbus podiceps) is a small-bodied, brown bird with a large head and unusually thick bill. The shape of their head and bill allows them to communicate with loud, far-reaching calls. Pied-billed Grebes walk awkwardly on land and are not the best fliers, but they are expert divers and typically spend most of their time on the water. Pied-billed Grebes are found across much of North America, usually on ponds and lakes with ample emergent vegetation.

Interested in learning more about birding? Check out our schedule of events for guided bird walks, presentations on how to get started, and more! Find a birding checklist and other resources on our Birding webpage.

Learn more about these bird species by visiting The Cornell Lab’s All About Birds webpage or Audubon.org.