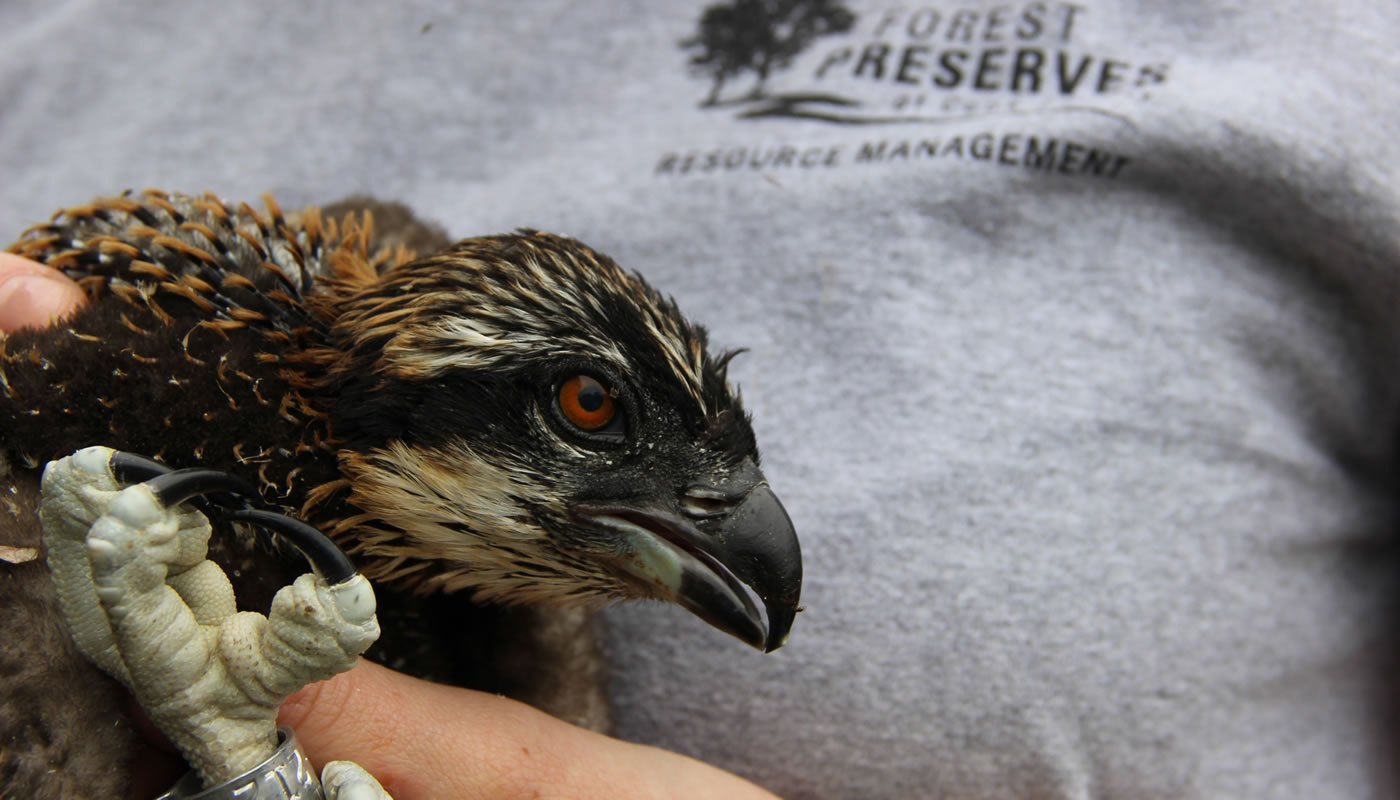 Forest Preserves biologists monitor these active nests, visiting each one in early summer to band and check on the health of the osprey chicks inside. See how the process works with these photos (and video) from this year’s first banding at Saganashkee Slough.

Each year there is a roughly 15 day period when this work can be done, so Forest Preserves biologists need keep a close eye on the osprey platforms to decide when to band the chicks.

A cherry picker provides temporary access to the nest atop the 50 foot tall platforms. Ospreys require a tall structure and plenty of space to build a nest and successfully raise young. As the sign says, please view osprey nests from at least 100 yards away.

After finding the right position, a staff member carefully places the osprey chicks into cloth bags. These bags help keep them calm on the way down.

Osprey parents don’t sit idly by during this process. Adult ospreys will circle the nest calling, and even use their vomit or droppings as weapons to protect the nest. In this case, the angry osprey mother dropped a fish she was carrying on the staff below. (See the video below for footage of the dropped fish).

VIDEO: Inside an Osprey Nest (& Flying Fish Attack)
See a Forest Preserves biologist carefully remove the osprey chicks from the nest… and an adult osprey try to drop a fish on her.

Once on the ground and out of their bags the chicks must be held carefully. Even if they aren’t ready to use those talons, they are extremely sharp and dangerous.

Wildlife staff members measure and weigh the chicks and check them for overall signs of health. This nest yielded three chicks approximately seven weeks in age.

Each chick gets an aluminum band with a unique identifier. It’s important to leave enough room between the band and the leg because osprey chick legs are soft and swollen at this stage. Why band? If banded ospreys are found again, we can track their migration, health and causes of mortality.

While nothing about the banding physically harms the osprey chicks, the process can lead to an increased respiratory rate. Each chick gets a little water, the first drink they’ve ever had, to hydrate them before they’re reintroduced to the nest.

Once the bands are on and the measurements are taken, the chicks are placed in the cloth bags and taken back up to the nest. In this case they had a little something extra with them—the fish their mother dropped on our wildlife staff.

These particular adults returned to the nest before the humans and equipment even reached the parking lot—and the newly reunited osprey family got to enjoy a nice fish breakfast. Learn more about our osprey program.