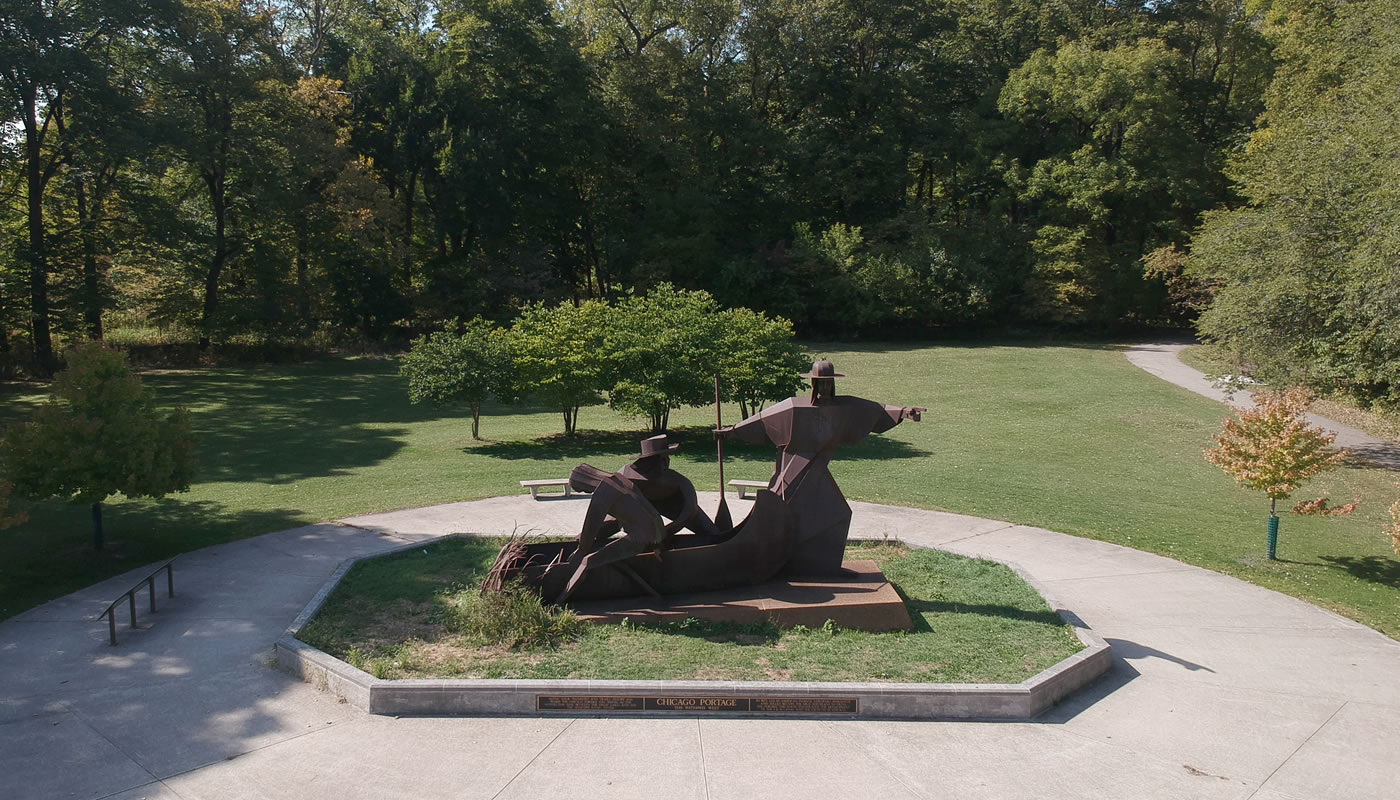 Location & Things to Do

Things to Do & Amenities

*Please be a courteous trail user: Follow posted signs and our trail rules and etiquette.

Situated on the east side of the Des Plaines River, the Chicago Portage National Historic Site commemorates the history of the connection between the Des Plaines River and the South Branch of the Chicago River. First as a seasonal water route or portage used by Native Americans and later as the Illinois and Michigan (I&M) Canal, then Chicago Sanitary and Ship Canal, this connection allowed travel between the Great Lakes and Mississippi River, significantly influencing the development of the City of Chicago and the Midwest region.

Formerly a complex of swamp, river, floodplain forest and prairie, this area bordered a narrow seven-and-a-half-mile-long swamp, later named Mud Lake. Native Americans used the route to travel between the Des Plaines River and the South Branch of the Chicago River, and therefore from the waters of the Great Lakes to the Mississippi River and Gulf of Mexico. When water levels were high, Mud Lake served as the missing link in a complete water route. When water levels were lower, travelers would need to portage—carry their boats and cargo—between the rivers to avoid the swampy Mud Lake.

In 1673, the Kaskaskia tribe shared knowledge of the portage with French explorer Louis Joliet and missionary Father Jacques Marquette, who were travelling north through what would become Illinois after exploring the Upper Mississippi River. Joliet and Marquette witnessed how the portage cut time on their return trip and saw the opportunity to increase the speed of travel and trade across the continent. Joliet believed that digging a canal along the route could create a more permanent and efficient connection between the Great Lakes and the Gulf of Mexico.

The idea to dig a canal between the Des Plaines River and South Branch of the Chicago River persisted even as the dynamics of the area changed over the next 150 years. The U.S. Federal Government and settlers forced Native people out of the area, culminating in a series of treaties between 1816 and 1833 that transferred what is now Cook County, including the portage route, from Native groups to the U.S. Federal Government.

Gurdon Hubbard, who had experienced the frustrations of the portage as a fur trader, was the main advocate for the construction of a canal between the two rivers and lobbied for its construction during his time in the Illinois House of Representatives. Work on the canal began in 1836, and the I&M Canal officially opened in 1848. The canal and newly established railroad connections helped position Chicago as a center of trade, fueling historic population increases over the rest of the century.

The construction of the canals altered the hydrology and ecosystems of the Chicago Portage site significantly. An artificial levee to the west—installed during construction of the I&M Canal—severed the connection to the Des Plaines River and permanently transformed the area’s original wet character.

The 50-acre Chicago Portage site was purchased by the Forest Preserves in 1921 and dedicated as a National Historic Site in 1952 because of its historic and cultural importance. Despite few remaining similarities to the portage route the Kaskaskia tribe shared with Joliet and Marquette in 1673, the legacy of the old portage still impacts our lives today, having shaped the routes of railroads, industrial corridors, and the Stevenson Expressway (I-55).

The Forest Preserves manages this natural area to promote the success of surviving native plant communities. The Chicago Portage site retains an open water marsh, floodplain forest, woodland, and savanna. Stewardship of the preserve is focused on the removal of invasive species, native plant enhancements, and prescribed burning to increase native plant habitat.

The Chicago Portage National Historic Site is a unit of the National Park System but owned by the Forest Preserves of Cook County. To obtain an NPS cancellation stamp, please reach out to:

Since 2002, the Friends of the Chicago Portage have been working year-round to return native plant communities to the Portage area, as well as keeping the trails clean and clear. Join a group of volunteers working to restore native habitat by removing invasive brush, collecting seeds and pulling weeds.